Skip to content
No Comments on WiFi Boosters: An In-Depth Look at the Top 3 Models Available in the MarketPosted in Brands By lyu0sPosted on February 16, 2022

Wireless connectivity is an important luxury in the 21st century. Without it, our devices are much less functional and enjoyable.

Sometimes even when we have wireless connectivity, its unreliable performance, slow speeds, and inaccurate coverage can make us wish we didn’t have it. When you’re waiting for that video to load all afternoon, you might wonder if you’d be better off without the internet.

Yet, after reflecting on this for a few moments, it’s clear how absurd this would be. The internet is here to stay as it greatly enriches our lives.

In this article, we discuss 3 of the best Wi-Fi boosters currently available, specifically the Netgear AC1200, the Linksys AC1200, and the Netgear Nighthawk X6 AC2200. First, we give an overview of each product, emphasizing each Wi-Fi booster’s benefits and drawbacks. Then we offer our final thoughts on which Wi-Fi booster is the most worthwhile to purchase.

An Overview of the Netgear AC1200 Wi-Fi Booster 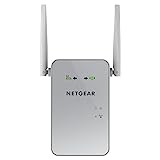 The Netgear AC1200 is a dual-band Wi-Fi booster and can be purchased on Amazon.

This Wi-Fi booster can boost your Wi-Fi up to 1200 Mbps and features a single ethernet port in case you wanted to wire a device to your wireless network.

This Wi-Fi booster plugs right into a wall socket and works with any existing router, expanding the area of your coverage and ensuring that there are no dead sports within your existing coverage.

The FastLane Technology that is included in this Wi-Fi booster allows it to maximize the use of both bands when connecting your devices, making it ideal for streaming and gaming applications.

Netgear advertises that the AC1200 is ideal for extending Wi-Fi coverage to smartphone devices, and tablets, as well as smart televisions that usually utilize some kind of streaming stick like the Amazon Fire TV.

The Benefits of the Netgear AC1200 Wi-Fi Booster 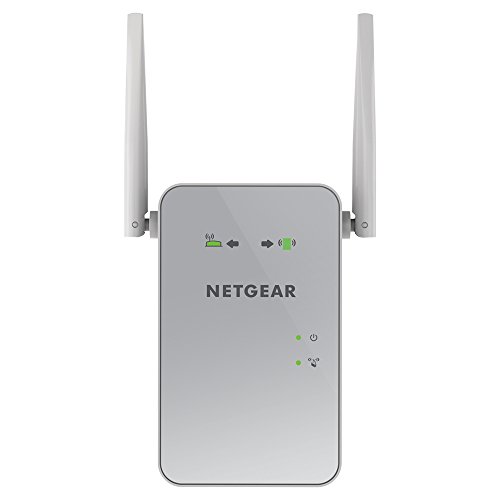 Perhaps the noticeable benefit of this Wi-Fi booster is how easy it is to set up. While many routers and Wi-Fi boosters feature easy setups that often use some kind of smartphone app, nothing beats having to plug a device into a wall charger. While users also have to press a button on the Wi-Fi booster and their router, this doesn’t take more than a couple of minutes.

Essentially, this Netgear Wi-Fi booster should not cause any stress when being installed, whereas some Wi-Fi boosters end up overwhelming users with complicated setups.

Additionally, the price on this Wi-Fi booster makes it very affordable when considering that some Wi-Fi boosters cost hundreds of dollars. This affordability allows you to channel your saved money into other accessories for your home network. With a more expensive Wi-Fi booster, you would not be able to invest in as many accessories.

The Drawbacks of the Netgear AC1200

The main drawback of the Netgear AC1200 is that it might not be necessary for certain users. If you live in a rural area with very few people nearby, then the Netgear AC1200 might not be ideal for you. This is because the extra band that prevents your network from slowing down would not be that effective since other users are not around to use your band.

Consequently, you might be able to spend less money on a single band Wi-Fi booster that still enhances your coverage, like this one featured on Amazon.

However, if you have a large family or live in an urban area with many people nearby, then the AC1200’s dual band system is practically a necessity.

An Overview of the Linksys AC1200 Wi-Fi Booster 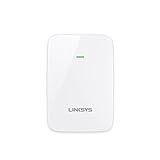 The Linksys AC1200 Wi-Fi booster can be purchased on Amazon.

This Wi-Fi booster also plugs into a wall outlet and synchronizes with your current router after you press the WPS button on both devices.

This Wi-Fi booster also has dual wireless bands, making it perfect for streaming, gaming, file transfers, or any high-bandwidth activity.

The Linksys AC1200 also features beamforming technology, which allows you to concentrate the wireless signal directly to certain devices in your network.

The Benefits of the Linksys AC1200 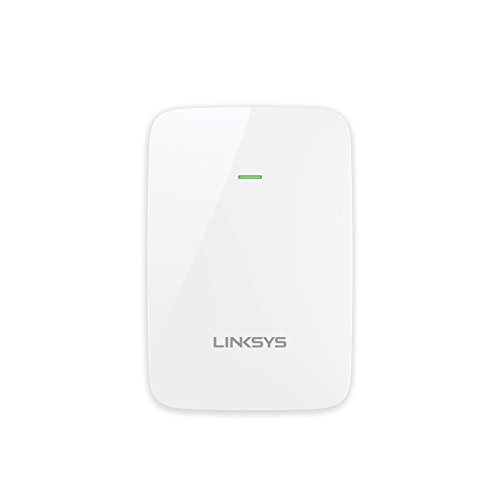 Like the Netgear AC1200, this Wi-Fi booster is very easy to setup and does a great job of patching up any dead zones in your current wireless coverage in addition to extending your existing area of coverage.

The beamforming technology makes this Wi-Fi booster one of the most innovative on the market. Users can essentially focus their wireless network to a particular device they are using, making the network more efficient. This allows multiple users to enjoy high-bandwidth activities on the same network, which is perfect for a family.

Even though capitalizing on the dual wireless bands can prevent slow speeds, this beamforming technology really ensures that family members can use all their devices.

Many children, for instance, like to do various high-bandwidth activities at the same time, like streaming a movie and gaming. Yet, even if this is all conducted over a demarcated band, sometimes users can still experience slow speeds due to the large amount of data that is being transferred. The beamforming technology helps mitigate these problems by ultimately making the entire system more effective in how it appropriates its resources.

Additionally, considering how effective the Linksys AC1200 is at extending your coverage. Some users even purchase multiple units for larger homes to ensure that every square foot has perfect coverage. While this might be unnecessary for most users, it’s still a testament to how affordable this product is.

Lastly, many users claim that they like the simple, unassuming design of the Linksys AC1200, as this makes it aesthetically dynamic. Many of us forget that these technologies have to be seen by our guests and us every day, as they become a significant part of the interior design of our residence. This makes their appearance critical, yet most manufacturers do not consider this when designing the product.

In this sense, you don’t have to worry about having a large, obstructive, ugly Wi-Fi booster in order to enhance your coverage, as the Linksys AC1200 is pleasing to the eyes no matter where it is placed.

The Main Drawback of the Linksys AC1200

It’s important to note that some users might need more bands, not less, like the three bands that are contained within a tri-band system. Some Wi-Fi boosters offer this kind of coverage, which is ideal for larger homes or where there are many users using the same Wi-Fi network. In these cases, even two bands are not enough to keep speeds high.

In this sense, if you are extremely sensitive to Wi-Fi speeds and want the best, fastest connection despite multiple users or a large area of coverage, then the Linksys AC1200 might not be ideal for you. Instead, we would recommend a Wi-Fi booster with more bands that extend over a larger area.

An Overview of the Netgear Nighthawk X6 AC2200 Wi-Fi Booster

This is a tri-band Wi-Fi booster that also features a seamless setup process. It also plugs into a wall outlet, though using a cord rather than directly. This means it’s more appropriate for desktop placement.

The Benefits of the NightHawk X6 AC2200 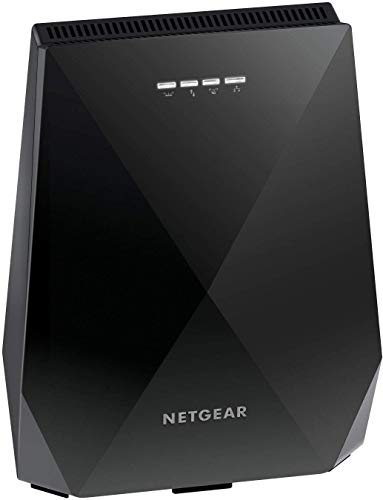 This Wi-Fi booster can boost your Wi-Fi by 2200 Mbps, making it almost twice as powerful as the Linksys AC1200 and the Netgear AC1200. Furthermore, the presence of the three bands makes each band less crowded with traffic, making this Wi-Fi booster ideal for a larger family home.

Additionally, some Wi-Fi boosters meant for larger homes provide unreliable coverage as users move between areas of the house. The Nighthawk X6 AC2200 avoids this by allowing uninterrupted coverage, no matter how you occupy your home. This means you can watch a movie in the living room on your tablet and continue watching it without disturbance as you walk upstairs.

This might seem insignificant at first, but many children unconsciously use their electronics at home. This means that their face is often glued to their devices, even when they are walking or moving to other places in the home. This Wi-Fi booster from Netgear allows their experience to be more immersive and realistic than ever.

Many inferior Wi-Fi boosters must switch between units as you move throughout a larger home, but this can be extremely frustrating. Sometimes when one Wi-Fi booster is switched out for another one, certain applications can be refreshed, or certain information is lost. This could be disastrous for some people that work from home.

In this sense, you want a Wi-Fi booster that is reliable whether you are stationary or in transit, and the Nighthawk X6 AC2200 provides this.

Our Final Thoughts on the Best Wi-Fi Boosters

We think the best Wi-Fi boosters should not only be affordable but also easy to set up and reliable. Most importantly, they will enhance your existing coverage to a noticeable degree, minimizing any past problems you had related to your wireless network.

If you are still not perfectly satisfied with your wireless network, then your Wi-Fi booster is not doing its job. After setting this technology up, your wireless connection should be lightning-fast and should allow you to use any application seamlessly.

We think the 3 Wi-Fi boosters discussed on this list are all effective, though for different settings. We think the Netgear AC1200 and the Linksys AC1200 are better for smaller households in which fewer users will be using the network. These are both comparable devices when it comes to network performance, but some users like the Linksys AC1200 better due to its aesthetics and lower price.

We think the Netgear NightHawk X6 AC2000 will provide faster speeds and be more ideal for larger households with more users. If you think two bands are not enough, then the tri-band system on this Netgear Wi-Fi booster will likely be sufficient.

The Future of Wireless Networks with WiFi Boosters

As you can tell, Netgear really pioneers the industry for Wi-Fi boosters. While we think Linksys’ products are certainly effective, we think Netgear has been making strides in recent years due to a number of new products.

The Netgear Orbi, for example, functions as both a router and Wi-Fi booster, allowing users to set up a wireless network while also boosting their network with additional Orbi satellites.

We think this system is the future of wireless networking. These mesh Wi-Fi systems prevent many of the inefficiencies that arise when building a wireless network using Wi-Fi boosters paired with routers.

Mesh systems make it easier to manage your network, as all the units are interconnected instead of serving only the router. This allows all the units in the system to better communicate with each other, resulting in faster internet speeds.

Yet, we understand that some homeowners don’t want to replace their current wireless network yet. In these cases, we think it’s best to purchase a Wi-Fi booster, as these devices still get the job done.

WiFi Boosters: An In-Depth Look at the Top 3 Models Available in the Market