Skip to content
No Comments on Toshiba Laptops: The Best Models Available in the Market TodayPosted in Resources By lyu0sPosted on February 16, 2022

Buying a laptop can be confusing.

With all the brands claiming to be the best, and with so many models to choose from, it can be difficult to know which laptop will be the best for you.

That’s why you need someone knowledgeable to hold your hand and guide you to the most trusted laptop brands and models.

Today, our brand of choice is Toshiba.

Toshiba laptops have a reputation for being reliable machines that give amazing value for money.

But which of the many Toshiba Laptops is the best for you?

Toshiba has been in the consumer electronics game for a long time and they have perfected the science of balancing performance, quality, and price.

Let’s take a look at 5 great options among Toshiba’s line of laptops, shall we? 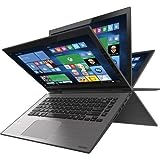 Looking for a cool and chic convertible that won’t burn a hole in your pocket?

Then it’s the Toshiba Satellite Radius 14​ you are looking for.

The Toshiba Satellite 14 is a well-built 2-in-1 laptop that offers you plenty enough juice for making some serious power moves other 2-in-1’s in its category can only dream of.

A simple look at the spec sheet will give you an idea of what I mean.

At first glance, the Toshiba Satellite Radius 14, unlike other Toshiba laptops, doesn’t have a wow factor. It features a simple matte black plastic chassis that makes it look like every other plain Jane.

That’s until you lift the lid.

Supported by one of the strongest hinges you’ll find on a convertible laptop is a brilliant 14-inch screen that can rotate a full 360-degrees. The next thing that will definitely grab your attention is the metal deck with a brushed finish featuring a great keyboard and a very responsive trackpad.

This is definitely one laptop that is well equipped to handle any of your everyday tasks. Even multitasking with many tabs open is not a problem for this nifty little laptop.

As for battery life, the Toshiba Satellite Radius doesn’t disappoint. It is well able to give you more than 6 hours of battery life, making it one of the best workhorses for those moments you just have to get some work done while away from a power source.

For an entry-level laptop that costs less than $350.00, the Toshiba Satellite Radius 14 is one laptop that will definitely give you more value than other laptops in its category.

The Toshiba Satellite P55Twas built to take on the MacBook Pro.

That says a lot about its caliber.

Upon being launched in 2015, the Satellite P55t was a show stopper, especially since it was one of the first laptops to feature a 4K display.

But that’s not the only trick up this premium laptop’s sleeve.

Let’s briefly take a look at its spec sheet before we continue.

Of all the Toshiba laptops that are made for power users, this is one of the models with better specs, as you can see below.

Right off the bat, you can tell that this is one laptop that was truly built to impress, especially since it comes sporting an Intel Core i7-4720HQ quad-core processor that clocks in at 2.6GHz (a turbo function boosts this to 3.6GHz)  and a massive 2TB hard drive.

This is a combination that not only makes for a fast laptop but one that is well able to tackle heavy tasks such as video editing. And once done, storing your project is a breeze as onboard space is plentiful.

As for the display, the 15.6-inch display’s 4K Ultra HD is as true to life as a display can be, making it a joy to create or consume content.

And if you thought these are the only tricks up the P55t’s sleeve, you haven’t reckoned with the dedicated AMD Radeon R9 M265X graphics card that makes this laptop a very capable gaming machine.

If you are a content creator or power user looking for a laptop to match your lifestyle, the Toshiba Satellite P55t is one of the best laptops you can get to help you unleash your creativity.

If you’re not a heavy user, perhaps you would like to consider a simple Chromebook to use for light computing tasks.

Toshiba has you covered there as well.

When Chromebooks were first introduced in 2011, this new breed of Google Chrome-run laptops was not really taken seriously.

But over the years, things have changed and Chromebooks are beginning to get the respect they deserve.

And one of the leaders in this category is the Toshiba Chromebook 2​.

One thing you need to remember when looking at this spec sheet is that Chromebooks don’t need much memory and processing power as most of the apps are cloud-based and not stored in the laptop’s memory.

So, what does this Chromebook pack inside its shell?

A casual look at this spec sheet and you’ll think the Toshiba Chromebook 2 is just like every other Chromebook on the market.

One of the things that set this Toshiba laptop apart, especially in the Chromebook category, is its 13.3-inch display. The Toshiba Chromebook 2 comes with a full-HD (1920 x 1080) IPS display, one of the features that set it apart.

If you’re looking for the brightest screen on a Chromebook, you’ll find it on the Toshiba Chromebook 2. Delivering an average brightness of 378 nits, it outshines the Acer Chromebook 13 (222 nits), and Samsung Chromebook 2 (214 nits) among its other competitors.

When it comes to color accuracy, the Toshiba Chromebook 2 is able to render a wider range of colors than all its competitors, managing to display 109.8 percent of the sRGB color gamut. This is a more colorful result than the than the displays of both the Acer and the Samsung who managed to reproduce 58.1 percent 57.4 percent respectively.

The other trick up this 13-inch Chromebook’s sleeve is the powerful battery it packs – it is well able to give you a good 10 hours of battery life. This is one of the best batteries you will find on a Chromebook.

For $230.00, this is one of those Toshiba laptops that were designed to give you exceptional value for money.

If you are looking for a powerful business laptop though, you can skip the Chromebook and head over to one of the most powerful Toshiba laptops you will find: the Toshiba Tecra Z40t-B. 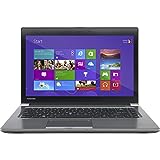 The Toshiba Tecra Z40t-B is one amazing business laptop that has many qualities that set it apart from its competitors.

Besides looking sleek in its silver magnesium shell, this is one laptop that lives up to all the other promises it makes.

Let’s take a look at the specifications so you can see what to expect from this titan of a laptop.

The Toshiba Tecra Z40t-B is a great lightweight and powerful business laptop that is powered by a very capable Intel i7 processor, 8GB Ram and has a 500GB hard drive.

This is one laptop that will serve you for a long time as Toshiba designed it to last long, especially with its built-in shock absorbers that protect the hard drive, display, and other critical components from damage when the laptop falls or experiences a great force.

A spill-resistant keyboard also helps the laptop last longer, especially in the eventuality of accidentally spilling your favorite beverage on it.

When it comes to performance, the Tecra Z40t-B, like all Toshiba laptops, gives the competition a run for its money.

For example, the Toshiba Tecra Z40t outperformed other business laptops in its category (even those with SSD drives) when it came to the spreadsheet test that matches 20,000 names and addresses.

Overall, the Toshiba Tecra Z40t-B is one of the best business notebooks on the market. Pound for pound, this is probably the best laptop you can find in its category, especially with its excellent battery that will see you through 8 hours of work.

If you are looking for a laptop for any use and need a machine that will give you great value, performance, and durability, you’ll definitely not go wrong with any of the laptops from Toshiba.

Although the company has moved away from making consumer laptops, you can still find some on the market. And when you do, don’t hesitate to pick one up for yourself.

Toshiba Laptops: The Best Models Available in the Market Today