Skip to content
No Comments on Blu Ray Players – The Best Models Available in the Market TodayPosted in Resources, Uncategorized By lyu0sPosted on February 16, 2022

In this day and age, most of the world’s media consumption is done through streaming. So why would anyone want to purchase a disc player when there’s no shortage of streaming services out there?

Despite the popularity of streaming, believe it or not, Blu-ray players are still going strong. While you can easily stream your favorite TV shows or movies with services like Netflix, there’s no beating a Blu-ray disc when it comes to sheer picture quality. This is especially true when you’re going to get a Blu-ray player that is capable of Ultra-HD quality.

So for today, we’ll list this year’s best Blu-ray players – from entry-level units to beastly machines.

Unlike most pieces of tech, the Blu-ray technology hasn’t really undergone much growth over the years. Older units can still be used up to this day. It would make sense to buy an older model if you are not too keen about the additional features with newer models.

However, this doesn’t mean that we will only feature players that are super new. Price is also an important factor that we have considered while making this selection, so you’ll see expensive players, budget-friendly units, and everything in between. Also, we will not limit the list to actual disc players as we throw in some home consoles into the mix.

Beyond that, we take into account the set of features, ease of use, image quality, and of course, value for money.

Below, we break down some of the best, top-rated Blu-ray players that you can find in the market.

The OPPO UDP-203 is not the newest model from OPPO, but that doesn’t matter because this player gives the best bang for the buck.

OPPO is known for their Blu-ray technology and this one doesn’t disappoint. This player supports 4K and High Dynamic Range (HDR) viewing for the best image quality. However, the UDP-203 doesn’t just offer excellent video quality but sound as well. That’s right: The UDP-203 can play lossless, high-resolution audio, which is great news for audiophiles. On top of that, this player can handle pretty much any audio and video file format that you throw at it – from UHD discs to the lowly CD-R.

All these excellent features are housed in a wonderfully sleek design that should make for a good entertainment room centerpiece.

The UDP-203 is easily one of the best Blu-ray disc players that will meet most people’s needs.

The Samsung UBD-K8500 is a great Blu-ray disc player for an Ultra-HD fan who’s on a budget.

You get a device that delivers everything that you will want from a disc player, and then some. For starters, the UBD-K8500 is capable of playing 4K HDR movies in its full glory. Even if it’s an entry-level machine, it can still give more expensive models a run for their money in terms of picture quality.

The video quality offers a wide range of color gamut and striking sharpness that enhances the little details. Pop in a UHD disc and you’ll see what I mean. The UBD-K8500 supports any disc format from CD to Blu-ray discs. With its built-in Wi-Fi, you can use the player to stream content from services like Netflix, YouTube, and Amazon. It even supports Bluetooth, which allows you to stream audio from your phone wirelessly.

The UBD-K8500 is a great way to enjoy 4K Ultra-HD movies without having to tap into your vacation funds. 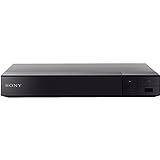 The Sony BDP-S6500 is yet another budget-friendly player but this time, it’s designed to squeeze the most out of your non-4K discs.

That’s the right, the BDP-S6500 is capable of displaying upscaled 4K resolution without actually using the appropriate disc. Basically, your old 1080p movies will be upscaled to 4K if your television supports it. So if you have a huge collection of old Blu-rays and don’t want to buy 4K discs, this one is for you.

Using the Miracast screen mirroring technology, you can actually mirror the screen of your Android device to the TV. The player also has built-in Wi-Fi, which lets you access over 300 streaming services including the most popular ones like Netflix, Hulu, Pandora, and more.

The only disappointing aspect of this play is that it lacks any display on the unit. Fortunately, the on-screen UI looks great and easy to navigate. However, some apps are slow and clunky (I’m looking at you, Opera Web Browser).

Sony definitely got this one right.

If you are mainly streaming your favorite shows and movies from Amazon Prime or Hulu, the LG UP970 will not be the best choice. That’s because you only get YouTube and Netflix with its built-in Wi-Fi. However, that’s not an issue if you already have a smart TV with its own set of streaming apps.

Beyond that, the LG UP970 is a very solid player. It’s capable of both playing discs and streaming in glorious 4K. It also supports HDR for more breathtaking picture quality and vibrant colors. In fact, UP970 really excels in color production and image sharpness, which just can’t be said with most “HDR” players.

Based on many reviews from Amazon, many users are experiencing loud noises from the unit. In our case, we cannot hear the motor running even if we try.

The UP970 is not ideal if you primarily stream your entertainment. However, this is a good player for burning through your Blu-ray discs.

In case you don’t know, Sony has invented the Blu-ray format so it’s not surprising that they’re killing it with their Blu-ray players – the Sony UBP-X700 is yet another successful model from the company.

Unlike many players in the market, the UBP-X700 supports both disc media and streaming. This player is a compact powerhouse. It’s relatively fast, the picture quality is top-notch, and offers all the streaming and entertainment apps you need.

Another thing we like about this player is that it’s future-proof. Aside from the usual 4K support, the player includes the widespread HDR10 for massively increased brightness and richly detailed blacks. On top of that, Sony will add support for Dolby Vision in 2018 for a more immersive cinematic experience.

Sony players have always been consistent performers, and the X700 is no exception. It handles all sorts of formats, and it’s surprisingly snappy when loading apps like Netflix.

The Sony UBP-X700 is a universal multimedia machine that deserves a place in your living or entertainment room.

It’s hardly a surprise that OPPO player has once again made the list. The OPPO UDP-205 is just the company flexing towards the competition.

Let me outright say that this is a monster of a Blu-ray player. For starters, it supports true 4K UHD quality without upscaling. It also supports Dolby Vision and you don’t even have to wait to get it. True enough, the UDP-205 offers stunning picture quality. If you don’t believe me, try popping in a 4K UHD disc of Planet Earth 2 and try not to be blown away.

However, what makes the UDP-205 a cut above the rest is the best in class audio. The player features twin analog outputs and the terrific digital-to-analog conversion chipset, made by ESS Technology. On top of that, it also has a headphone amp. Combine the UDP-205 with a beastly set of speakers, and you got yourself a killer home theater system.

One of the most glaring drawbacks is the price, which is a deal-breaker for most people. This is purely an audiophile player, which serves a very niche market.

The Philips BDP-7502 is about as basic as you can get when it comes to Blu-ray players. That’s not necessarily a bad thing.

The BDP-7502 is a rock-solid player with a fairly attractive design. The slim, brushed metal should be a good centerpiece for your entertainment space. The player supports upscaled 4K resolution but handles the upscaling part really well. On top of that, it can handle 3D without any issues.

For your HDR needs, the BDP-7502 has both Dolby Vision and HDR10, so you are covered. Dolby Vision works by adding incredible brightness, contrast, and color that really bring scenes to life. You’ll sometimes forget that you are looking at a screen. While it’s not heavily marketed by Philips, I have to say that there have been some improvements to the sound quality of the unit.

Overall, Philips did a great job by getting the basics right without all the extraneous features.

Now, here comes the rogue video game console that somehow found its way into the list. Well, if you want a solid 4K UHD player that can play games, getting the Xbox One S is not a bad idea.

Why did I not recommend the PlayStation 4?

Well, it’s largely because the PS4 can’t play 4K UHD discs, which is the opposite with the Xbox One S. That’s right: The One S can display 4K video from Ultra HD Blu-rays and streaming services like Netflix. It supports HDR for both video and games.

However, you have to keep in mind that the 4K, Ultra HD Blu-ray, and HDR settings will only work with newer TVs.

Of course, there’s also the fact that you can play games on it. The Xbox has some great exclusive games like Gears of War 4, Cuphead, Halo 5, and more.

Found Your Player Yet?

That concludes our list of the best Blu-ray players.

Hopefully, we have helped you find the right model for your entertainment. If I have to choose, I will have to go with the OPPO UDP-203 since it’s pretty much a complete player that should work for you in a long time. Regardless of your choice, it’s hard to go wrong with any of these players.