Skip to content
No Comments on Alienware Alpha Review: Is It the Best Gaming Rig of Today?Posted in Brands, Reviews By lyu0sPosted on February 16, 2022

It is interesting that when you attempt to access the Live Alienware Alpha webpage on the Dell website, you are told that the item is no longer available online and you are promptly redirected to either the Aurora or the Area 51 mini-desktop models.

Could this be another case of the Dell DJ Ditty?

For those of you who are upright and facing the right way, Dell bought Alienware in 2006, and you have to do a little digging to find the cached and hidden Alpha profile page, through which we are told that the Alienware Alpha, before it was discontinued came in two flavors: the original Alpha and the Alpha R2. The former was billed as a PC/Console hybrid, and it was released in 2014, featuring a custom-built Nvidia GTX 860M video card, Core i3, i5, or i7 processors from Intel, 8GB RAM, and an option of a 500GB to 2TB HHD.

The latter featured an ultra-small form factor, was also a console hybrid and it was released in 2016. Alienware Alpha R2 came with the customizable configuration of an AMD Radeon R9 M470X GPU with 2 GB GDDR5 memory or a Nvidia GeForce GTX 960 GPU with 4GB GDDR5, and the processor consisted of the choice between 6th generation Intel processors: Core i3 6100T, Core i5 6400T, or Core i7 6700T. The RAM came in 1 stick configurations of 8GB or 16GB, and HDD and SDD were also available.

The Alienware Alpha History and SteamOS 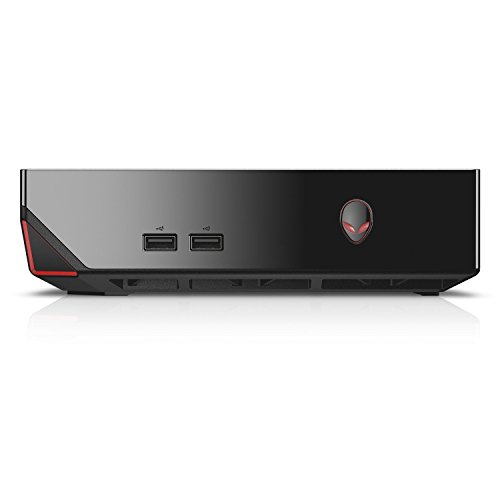 Moreover, the HDD in the R2 was a 1TB drive with a 7,200 spin rate, while the SSD came in the form of the M.2 mini-PCIe standard and offered sizes ranging from 256GB to 1TB. The console also featured a graphics amplifier slot as well as a Windows 10 OS.

The Alpha shipped with Windows 8 and was too underpowered to play most popular games in full hardware mode, which didn’t exactly stir the coals into embers of enthusiasm with gaming fans to begin with. However, for a brief time in 2015, the Alpha R1 morphed into a Steam Machine that came with the much heralded open-source LINUX OS called SteamOS. 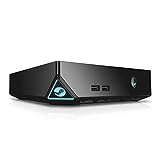 In a time when many suffered from Windows fatigue as they awaited the next stable operating system from Microsoft, SteamOS offered a glimmer of hope as an alternative gaming and PC OS savior. However, as the people waited the years passed, and still there was no sign of the SteamOS.

Then, in 2015, the year of the Steam Machine, it finally arrived. However, the goodwill and anticipation was slightly diminished even then and dissipated ever further when the OS was quickly proven to drop frames during gameplay and presented many issues in full-screen mode. These bugs revealed that it clearly was not ready to be thrust into the limelight of mainstream gaming.

However, originally, the Alpha was going to be the flagship Valve Steam Machine, and it came with both the wacky Steam Controller and the Open Source SteamOS. But when Valve called an audible to regroup and revamp their failing OS, Alienware decided to ship the R2 with Windows 10 and the Xbox 360 controller instead.

The R2 had a lot going for it: the Alienware name, its two in one value, its built-in power, and its small, attractive form factor. Moreover, it was smaller and more powerful than it main console competitors at the time, the PS4 and Xbox One. Plus, it actually doubled as a desktop PC. What could be cooler? You could get cheap PC games for your PC computer and more expensive titles for you console and play them both on one machine. 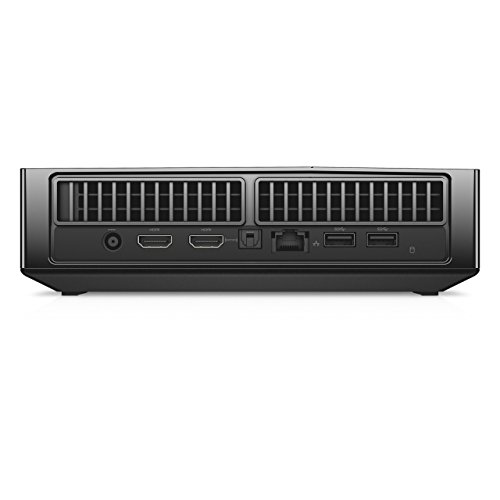 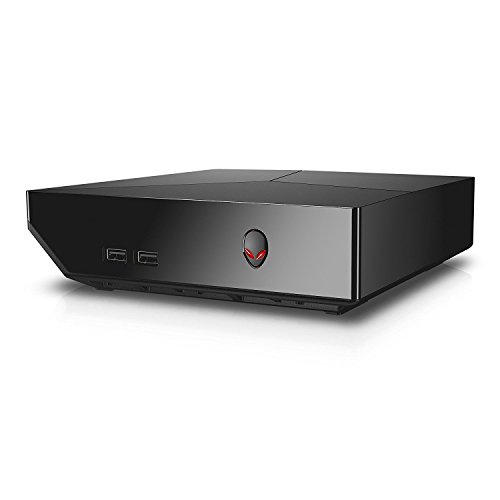 One that is available on Amazon boasts a 2.8-GHz Intel Core i7-6700T processor with 16GB of RAM, a 1TB, 7,200-rpm hard drive, and a Nvidia GeForce GTX 960 GPU with 4GB of VRAM. However, the entry level price point at the time had people asking why not just invest in (or build) a beefy, upgradeable desktop PC instead for similar or even less money?

The Alpha R2 did try to add value to their hybrid PC and gaming console by offering a large catalog of multimedia apps for music and video, but, alas, much like the plight of Saga, the Alpha line was already doomed, in part, due to its several missteps from previous iterations, and was finally discontinued in 2016-17.

Still might be fun to unbox one, with the help from our friends at Tom’s Guide. And, according to Sherri L. Smith, the first thing that struck her was how small it was. Smaller than her Xbox 360 or PlayStation 4, it was closer in size to something like a Nintendo Wii, only boxier and black.

The black box is unadorned with the exception of a lopped-off corner and a blue glowing alien head power button. The backlighting that illuminates these features can be controlled via the preinstalled AlienFX software. The second thing she noticed was how long it took to get up and running.

While peripheral cable and device amount to a laptop-style power brick, a wireless adapter, and an HDMI, the problem arises in having to navigating through Windows setup screens, signing into accounts, and registering an Alienware email (an annoying and required step), setting up an Alienware password, signing license agreements, and rebooting more thanonce.

The result is a grueling hour-long set up that is quite the buzzkill for an excited gamer. Plus, once you have made it past Windows, you have to set up Steam Big Picture Mode and buy and install games, which, by the way, can only be downloaded one at a time and can’t be played until they’re fully downloaded. You also can’t start playing the first game while you download others in the background, at least not by default; that ability must be specifically enabled somewhere within the depths of the Steam Big Picture Mode.

Your best bet, then, is to download and install a whole bunch of games overnight and sit back with a cold one. It really is a curiosity that a company would bother to make a console with such a frustrating way of distributing games. But Dell is not new to the idea of releasing hardware without considering how consumers will use it.

When Dell’s tablet-laptop combo premiered in 2010, the public and media were abuzz about its potential duality, varied uses, and functionality. The Inspiron Duo was supposed to herald in a new generation of laptop/tablets, but all consumers got was a flimsy 10-in tablet mounted on a swivel with laughable battery and a price that punched far above its price class. Needless to say, the Inspiron Duo had a short run.

And, remember the DJ Ditty? Neither do most people. But this supposed “iPod Shuffle killer” was built as Dell’s response to the wildly successful Apple media consuming product, the iPod Shuffle, and featured a 5GB of memory and an FM radio. Unfortunately, Dell didn’t consider retail channels or media distribution chains, and the Ditty was a Dodo by 2006.

The Adamo was an ultra-slim laptop before ultra-slim was cool. It featured a giant 17-in screen and portability to rival the MacBook Air. Heralded as the next coming of lightweight powerful computers on the go, what consumers got was an anemic 1.3-GHz processor, a machine that could not be upgraded. The line was short-lived and eventually killed in 2011.

The Dell Smartphone and a phone/tablet hybrid that was too big to fit in your pocket but not big enough to watch movies on round out the top hardware flops from the company, but we may have to add the Alpha to the list as well.

To make matters worse, the early R2’s were equipped with a painfully watching-paint-dry slow 5400rpm hard drive that Alienware should never have shipped with this system. Freezing, dropped frames, sluggish loading and booting all were a result of this oversight. Plus, the lack of a keyboard and a mouse meant that some PC classic games could not be proper launch or run at all. Another misstep.

It really was too bad because the Alpha looked pretty sweet, and, by all accounts, on paper, it should have been. Armed with some powerful hardware and the ability to upgrade through various ports – 3.0 in the front, a 2.0 at the bottom, Ethernet, optical audio out, and a proprietary connection for the Alienware Graphics Extender (for hooking up beefier GPU’s) – the Alpha should have found appeal with those craving gameplay in front of their 52 inch plasma TVs.

The distinct lack of DisplayPort and Type-C or Thunderbolt is definitely an oversight but included Wi-Fi and Bluetooth were certainly valuable additions.

Well, then, what really happened to the Alpha? Do you want a game console? What happened to it was that by the time Alienware figured it all out and began making a top-notch console, it was too late. The public had moved on.

The Alpha proved over and over again that there are way too many things wrong with it, from Alienware themselves originally stuffing it full of underpowered hardware to Valve jumping the run with their SteamOS release. Microsoft, too, didn’t consider the user experience much when they developed the Alpha OS.

Despite all that, it might still be the console that looks best in your living room. Plus, you can now find versions with SSD drives, Corei7 processors, and upgraded RAM. Keep a keyboard and mouse laying around close by. Of course, you will be stuck with a flaky OS without updates (since it’s been discontinued), but the upshot is that you’ll have access to 1000’s of PC games that you can play on your wide-screen TV.

Alienware Alpha Review: Is It the Best Gaming Rig of Today?